What kind of self-confident nation or culture would allow itself to be lectured to by children? And what kind of adults would use children for political purposes? First Greta, and now this? 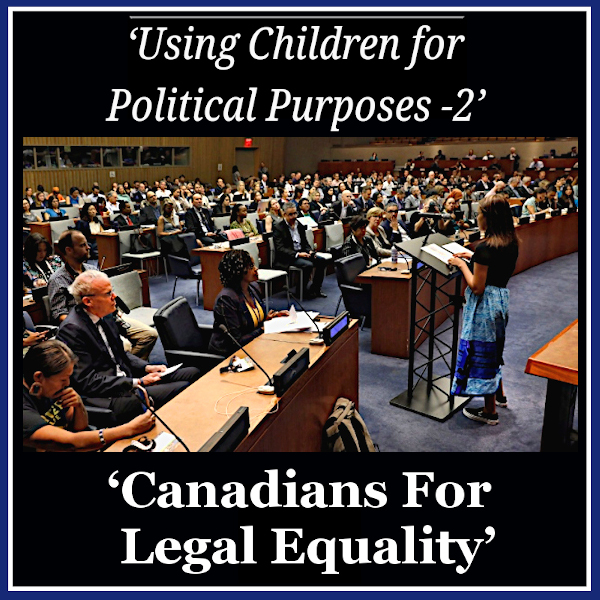 “The 15-year-old ‘activist’ from Wiikwemkoong ‘First Nation’ {a ‘nation’ of 8,268 people} on Manitoulin Island in northern Ontario urged the global community to respect the sacredness and importance of clean water.

{Yet, aboriginal leadership constantly demands money as their ‘entitlement’ from Canadian taxpayers…}

“Peltier spoke at the ‘Global Landscapes Forum’, a platform on sustainable land use founded by UN Environment and the World Bank… She used the speech to draw attention to the lack of clean water in numerous ‘indigenous’ {‘aboriginal’} communities, which she says sparked her activism…

“She said she’s been taught traditional knowledge from an early age about the sacredness of water, and that more should learn these lessons.

“Maybe we need to have more elders and youth together sitting at the decision table when people make decisions about our lands and waters.”
{They’re NOT your ‘lands and waters’. They belong to ALL Canadians and your racist worldview is unhelpful…}

“Peltier called for an end to plastic use as one step in restoring a more sustainable world… The speech was her second at the UN headquarters, having urged the General Assembly to “warrior up” and take a stand for our planet last year. Peltier, who is nominated for the 2019 ‘International Children’s Peace Prize’ by the ‘David Suzuki Foundation’, has spread her message at hundreds of events around the world…”
{Does she not attend school? And who is paying for all of her expenses??} 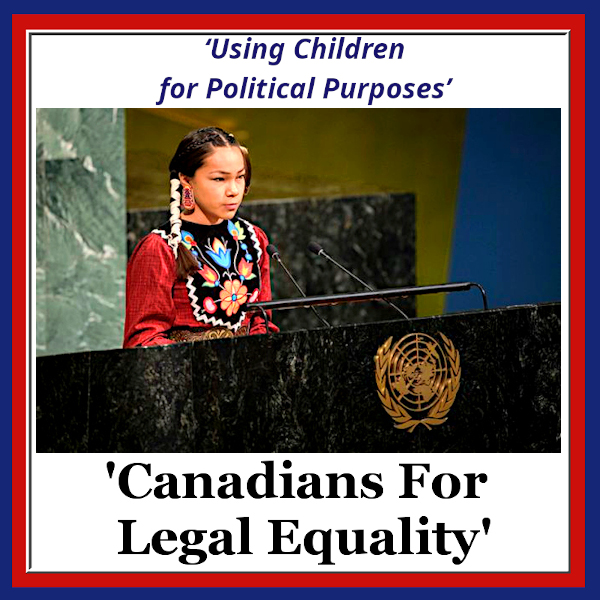 See also:
‘Using Children for Political Purposes’ {Sept.28, 2019}:
Issues like these would best be served by the conversion of reserves into municipalities and the application of provincial standards, as is the case for all other Canadians. As long as there is Constitutional Segregation, it will be ‘Us’ and ‘Them’. Where are the Canadians – including aboriginals – who’ll do the right thing?
“This weekend, Autumn Peltier {15 years old} — the chief water commissioner for Anishinabek ‘Nation’ {a lobbying organization with a misleading name}, which advocates for 40 member ‘First Nations’ {aboriginal communities} in Ontario — will return to the United Nations to share her vision for a world in which everyone has access to clean water.”
https://canadiansforlegalequalityblog.wordpress.com/2019/09/28/using-children-for-political-purposes/

‘Mother Earth?’:
“We are constantly lectured by aboriginal supremacists about how ‘white man’ needs to understand our relationship with ‘Mother Earth’, the way that aboriginals ‘inherently’ do. It will therefore come as a surprise to many that ‘Mother Earth’ as a concept in Canadian culture is European in origin and has virtually no history or connection with aboriginal culture or belief – and that’s according to aboriginal elders and ‘scholars’.”
https://endracebasedlaw.wordpress.com/2016/09/19/mother-earth/

‘The Myth of Aboriginal Environmental Stewardship’:
“Nothing is so pernicious as the profoundly-racist notion that somehow ‘indigenous peoples’ are genetically endowed with a special relationship, a spiritual kinship, with nature that makes them superior caretakers of the land … Why is so much weight afforded to what is essentially raw, localized experience? If you strip away its spiritual accoutrements, you’re left with little more than the same wisdom that allows a fisherman to gauge impending weather, or derive crude conclusions on the state of fish stocks… Surely, this is common sense. A person of any race or background can, at least in theory, be equally capable of protecting or destroying the environment.”
https://endracebasedlaw.wordpress.com/2016/05/11/the-myth-of-aboriginal-environmental-stewardship/
♣♣♣♣♣♣♣♣♣♣♣♣♣♣♣♣♣♣♣♣♣♣♣♣♣♣♣♣♣♣♣♣♣♣♣♣♣♣♣♣♣♣♣♣♣♣♣♣♣♣♣♣♣♣
Post also at: