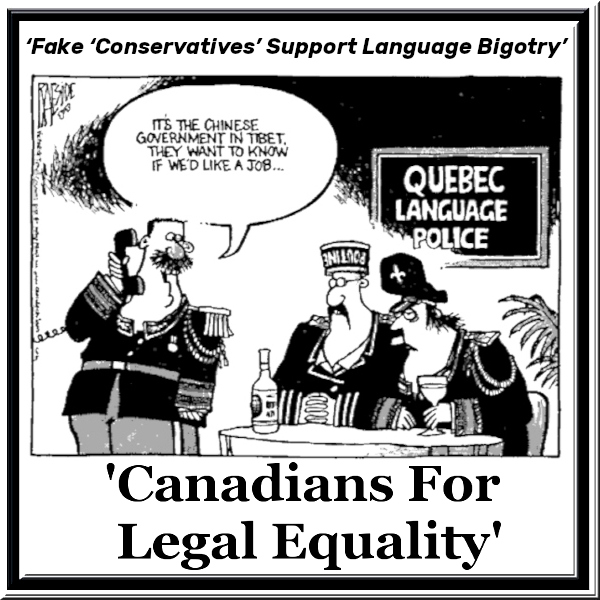 “‘Conservative’ {Party} Leader Erin O’Toole has joined the Bloc Québécois and the New ‘Democratic’ Party in supporting Bill 101 rules for the {forced} use of the French language for federally chartered businesses and activities operating in Quebec… O’Toole…spoke only in French during the debate… O’Toole said the federal ‘Liberals’ have fought against Quebec nationalism, while his party, “the true blues of Quebec”, are the best defenders of Quebec’s interests… Aside from O’Toole, all the ‘Conservative’ {Party} speakers during the four-hour debate were Quebec MPs, in an apparent bid to woo voters in the province…

“ The CAQ plans to present a bill beefing up the province’s language laws to ensure immigrants coming to Quebec integrate into the French-speaking majority.
{But French-speakers don’t have to integrate with their fellow English-speaking Canadians. Such blatant hypocrisy…}

“And Simon Jolin-Barrette, the minister responsible for language, said this week he wants his bill to be adopted unanimously by the Quebec national assembly. Jolin-Barrette also wants Ottawa to agree that employees of banks, airlines, railways, telecommunications and broadcasting concerns, as well as federally-chartered companies in the province, should come under Quebec’s {discriminatory} francization rules.

“Speaking in a four-hour “take note” debate in the House of Commons on Wednesday night on the subject of “the status of the French language in Montreal”, O’Toole said he’s proud to live in a country that has French as a language, calling it “part of the identity of our country”.

“In addition to Quebec, there are francophone Acadians and {small} French-speaking communities across the country, he added.

“O’Toole, who spoke only in French during the debate, said he was born in Montreal, then left for Ontario with his parents when he was 18 months old. He learned French later at age 18 in the Canadian Forces.

“I am proud to be bilingual”,
he said, referring to “the alliance” of Canada’s two English-speaking and French-speaking founding peoples. O’Toole said the federal ‘Liberals’ have fought against Quebec nationalism, while his party, “the true blues of Quebec”, are the best defenders of Quebec’s interests.

“For a long time, ‘Liberals’ refused to protect French in Quebec, because they did not want to harm linguistic minorities in Canada”,

he said {? Nonsense…}. The ‘Liberals’ “prefer discussing to acting”, by using the ‘Official Languages Act’ to defend French and English linguistic minorities, O’Toole said, calling this a “false equivalency”.

“Only French is threatened”,
{Fear-mongering like a Quebec separatist…}
he stressed, noting that from 1996 to 2016, the percentage of Quebecers whose first language is French fell from 52 to 46%.
{Another phony ‘crisis’…}

“To Legault’s call that ‘Bill 101’ rules be extended to federal jurisdictions in Quebec, “We answer: present”, he said.

“The central place of French in Quebec makes Canada a strong country and a bilingual country. We cannot afford to lose that.” {Why not?}

“Pablo Rodriguez, the Argentine-born ‘Liberal’ {Party} MP from Montreal, who is also ‘Liberal’ {Party} house leader and the government’s Quebec lieutenant, recalled that when he came to Quebec as a child, he spoke only Spanish, but he learned French, “the most beautiful language in the world”.

“French is the common language of Quebecers”,
and is Quebec’s official language, Rodriguez said.
“It is a language that is both beautiful and fragile. It is our language that we share with thousands of francophones from every region in Canada. We must love, cherish, share and protect it.”
{Stop with the xenophobic hyperbole!}

“Rodriguez said the 35 ‘Liberal’ {Party} MPs from Quebec will also defend it. But Rodriguez and other ‘Liberal’ {Party} speakers in the debate, including Steven Guilbeault and Mélanie Joly, the minister responsible for official languages, would not commit to extending the rules under ‘Bill 101’ into the federal domain.

“There is no unique solution”,
Rodriguez said.
“We have to do more. We will do more.”
{Then the rest of us will have to push back!}

“The opposition also targeted Emmanuella Lambropoulos, a ‘Liberal’ {Party} MP from the ethnically-diverse Montreal riding of Saint-Laurent, who expressed her scepticism that French is endangered in Montreal. Lambropoulos resigned from a Commons committee on official languages and apologized for her remarks.
{Stalinist-like ‘mea culpas’ are now the Canadian norm..}

“Opposition members questioned Joly about her proposed bill to reform the ‘Official Languages Act’, which declared French and English Canada’s official languages in 1969, before Quebec’s ‘Bill 101’ declared French as Quebec’s only official language in 1977.
{And used the notorious ‘Notwithstanding Clause’ to get around the human rights and Constitutional violation implicit in their discriminatory language laws…}

“‘Liberal’ {Party} speakers included MPs from Quebec, New Brunswick, Nova Scotia, and Ontario, with two Montreal members from predominantly English-speaking ridings declaring their support for the French language and for bilingualism. The Bloc Québécois has presented a bill to require immigrants living in Quebec who want to become Canadian citizens to have “sufficient knowledge” of French.

“Bloc Leader Yves-François Blanchet began his speech in the debate by attacking the NDP, criticizing NDP Leader Jagmeet Singh for calling the Bloc’s House leader “racist” for rejecting a motion on “systemic racism”, before accusing the ‘Liberals’ of approving attacks on French.

“When Quebec arises, it will not stop”,
Blanchet warned.
{One of these days, your threats are going to backfire…}

“No federal government is worthy of the confidence of Quebecers”,
Blanchet shot back…
{Traitorous bastard!}

“Mario Beaulieu, a ‘language hawk’ {‘French bigot’} who switched from the Parti Québécois to become a Bloc MP, said French is ‘endangered’ in Montreal, where English is on the rise.

“The only way to ensure the future of the French language is through Quebec’s independence”,
Beaulieu said.
{Another traitor…}

“The NDP’s Alexandre Boulerice said there’s been a slight decline of three percentage points in French spoken in Quebec homes: from 82% in 1996, to 79% in 2016.
{Quelle horreur!} 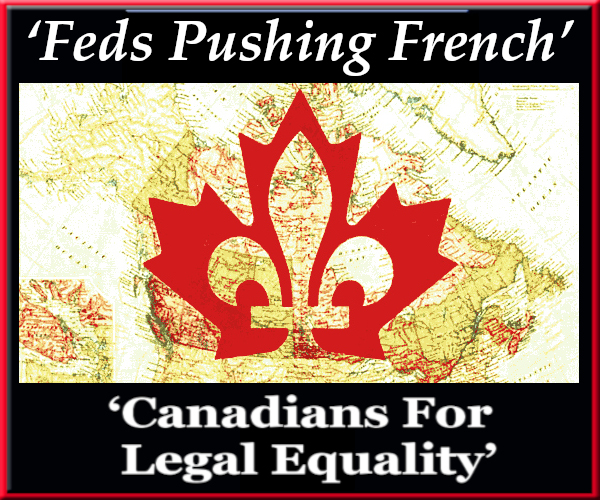 See also:
‘Feds Pushing French’ (Francophone Immigration) {Oct.30, 2020}:
Another example of blatantly-hypocritical and discriminatory policies that enable the expansion of Francophone communities outside Quebec while ignoring the repression of English-speaking communities inside Quebec – all of it enabled by a flawed and discriminatory Canadian Constitution.
P.S. Why don’t provincial governments take over their own immigration, the way that Quebec has?
“The federal government will give an advantage to skilled workers who speak French and are applying for permanent residency and immigration to Canada…”
https://canadiansforlegalequalityblog.wordpress.com/2020/10/30/feds-pushing-french/ 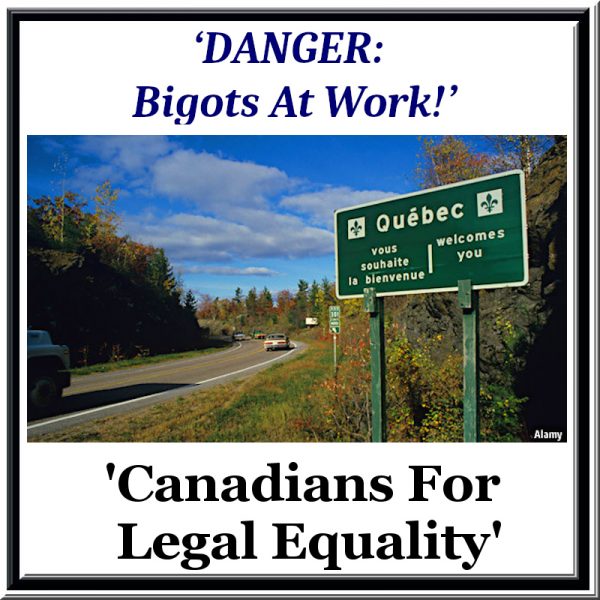 ‘The ‘Indigenization’ of British Columbia Law’

Canadian governments are busy establishing a legal framework where Canadian law becomes subservient to the United Nations ‘ Declaration on the Rights of Indigenous Peoples’, regardless of the wishes of the Canadian people. British Columbia – along with the federal government — are foolishly leading the way in this undermining of Canadian democracy: “Overlooked during […]

We stand strongly opposed to any ‘rights’ based on race or ethnicity: “I swear (or affirm) that I will be faithful and bear true allegiance to Her Majesty Queen Elizabeth the Second, Queen of Canada, Her Heirs and Successors, and that I will faithfully observe the laws of Canada, including the Constitution, which recognizes and […]

‘Canada Is NOT A Bilingual Country: Suppressing English Again In Quebec’

Canada is NOT a bilingual country. Quebec language Bigots are suppressing English again, with the support of the federal ‘Liberal’ Party government…and the ‘Conservative’ Party Opposition: “As Quebec’s contentious language law heads closer to adoption, the province’s business community is growing increasingly anxious about what it could mean for their bottom line, with some companies […]

“The ‘Village of Pemberton’ recently voted to change the name of British Columbia. They have no idea to what, only that it should change. Pemberton councillors also put forward a motion at the ‘Lower Mainland Local Government Association’s annual general meeting. They want the province’s name sent down some Orwellian memory hole.” “A few years […]

“Other countries have public intellectuals; Canada has Supreme Court judges. It is well-known that no decision of public importance is final unless the Nine have given their opinion. But even off the bench, they occupy an outsized place in the “national conversation”. They are the subject of excruciating puff pieces in newspapers; their extra-judicial utterances are […]

‘Reflections on the Charter’

Originally posted on Constitution Canadian:
“Rather than protecting us from government overreach, the Charter is being interpreted to justify it. After 40 years, the Charter is still one of the worst bargains in Canadian history.” “The year 2022 is not a good one for celebrating the Charter of Rights and Freedoms. “We mark the 40th…