“It was very ‘disrespectful’, totally uncalled for“,
{YOU are the one being ‘disrespectful’!}
Birch Narrows Chief Jonathon Sylvester said.
“This is not being done properly.”

“It’s unclear how the stalemate will be broken {? The Treaty language is clear – See below}, but the case raises a host of legal, environmental and economic issues.

“One academic said Canada’s Constitution and ‘emerging’ case law is clear:
‘First Nations’ concerns must be front and centre on any development affecting them.

“Certain behaviours or ways of doing business that might have worked in the past no longer work, based on a more ‘robust’ understanding {? You mean ‘fictitious’ understanding} of how treaty rights and aboriginal rights need to be ‘reconciled’ {lied about}“,
{Aboriginal Industry} lawyer and University of Saskatchewan lecturer Benjamin Ralston said.

‘They can’t do this stuff to us’
“Birch Narrows trapper and elder Ron Desjardin discovered the survey crew earlier this month on one of the community’s trap lines, 600 kilometres northeast of Saskatoon. The area sits on the edge of the Athabasca Basin. It’s home to some of the world’s richest uranium deposits but also to endangered woodland caribou, lynx and other wildlife.

“Desjardin called Sylvester to see whether he had ‘given permission’ for the crew to begin its work. Sylvester had not. Desjardin says a proper wildlife and habitat study must be conducted before any talks can begin on uranium exploration in their {former, surrendered by Treaty} ‘traditional territory’.

“A few days later, the ‘Baselode Energy’ workers were again seen at the site. Desjardin told them they shouldn’t be there, particularly since the area was in ‘lockdown’ {‘unConstitutional state repression’} because of a ‘COVID-19’ outbreak.

“Man, that really was infuriating because it was just so ‘disrespectful’. Just total disregard”,
Desjardin said.
“We’re not back in the 1800s anymore. They can’t do this stuff to us.” {!}

‘Company says it obtained all provincial permits’ {!}
“Stephen Stewart, the chair of ‘Baselode’s board, said in an interview that the company obtained all necessary provincial permits. He said the initial survey would have next to no environmental impact. Stewart said the company started work because it has to be done when the ground is frozen… Stewart also said he meant no ‘disrespect’.

“I will note that we are permitted to do this work, but permit and the consent of the community are different things“,
{They shouldn’t be!}
he said…

“Stewart said he and his officials will work closely with Birch Narrows. He’s now promising the project will not proceed unless the ‘First Nation’ agrees…
{More do-gooder racism. They need to be reminded of the Treaties! See below…}

‘Traditional land-use study not required, province says’
“Neither Saskatchewan Environment Minister Warren Kaeding nor Energy and Resources Minister Bronwyn Eyre was made available for an interview. A provincial official emailed a response.

“The official said Birch Narrows was given ample time to voice any concerns. Like Stewart, they said this is an exploration phase and there will be no drilling or digging. The province takes the position that a traditional land-use study is not required by law. In the statement, the official said that “deliberately blocking Crown lands is illegal“ and could {‘should’!} be referred to the RCMP.

“But {Aboriginal Industry} law instructor Ralston of the University of Saskatchewan in Saskatoon said the Constitution and recent Supreme Court of Canada rulings make it clear that there is a “duty to consult and accommodate” ‘Indigenous’ rights {Race ‘rights’} holders.

“Those ‘inherent’ and treaty rights override any provincial permit process, he said. That’s why provincial governments and resource companies are better off ‘working in good faith’ {‘doing as they’re told’} with ‘First Nations’ than risking a time-consuming, expensive court battle they may not win, he said.

“At the end of the day, Aboriginal and treaty rights are constitutionally entrenched. So if the process by which those permits were issued is in breach of the Crown’s obligations, then a court could invalidate those“,
Ralston said.

{Then they should take it to court, but they have no right to physically interfere with legal and approved operations. It is NO LONGER their land!}

“The blockade is no longer up, but Birch Narrows members are ‘patrolling’ the area regularly. Trapper and elder Desjardin said they’re still willing to talk, but only if the government and Baselode treat the First Nation’s members with {unearned} ‘respect’…”

“Half of the community is non-status (many are related to ‘First Nation’ people): because of the difference in the status of the two populations as it relates to treaty rights, jurisdictional conflicts have been common… 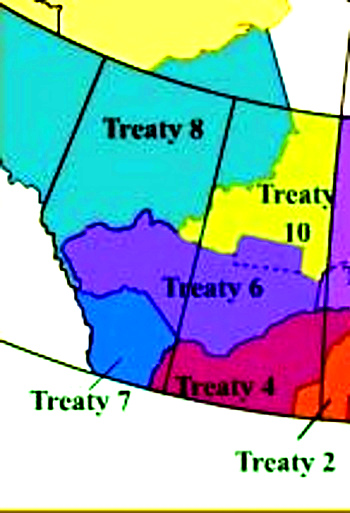 TREATY 10: “The Chipewyan, Cree and Other Indian inhabitants of the territory within the limits hereinafter defined and described by their chiefs and headmen…do hereby cede, release, surrender and yield up to the government of the Dominion of Canada for His Majesty the King and His successors for ever all their rights, titles and privileges whatsoever to the lands included within the following limits…”
{There follows a lengthy description of the territory ceded, released, surrendered, etc.}

“And also all their rights, titles and privileges whatsoever as Indians to all and any other lands wherever situated in the provinces of Saskatchewan and Alberta and the Northwest Territories or any other portion of the Dominion of Canada.

“To have and to hold the same to His Majesty the King and His successors for ever.”
https://www.rcaanc-cirnac.gc.ca/eng/1100100028874/1581292941464
♦♦♦♦♦♦♦♦
So, the land now belongs to Canada. There is also a ‘Behavioural Clause’ in Treaty 10 which the Band is breaking with the blockade:
‘TREATY 10’: {northeastern Saskatchewan…}:
“And the undersigned Chipewyan, Cree and other Indian chiefs and headmen on their own behalf and on behalf of all the Indians whom they represent DO HEREBY SOLEMNLY PROMISE and engage TO STRICTLY OBSERVE THIS TREATY IN ALL AND EVERY RESPECT and to BEHAVE AND CONDUCT THEMSELVES AS GOOD AND LOYAL SUBJECTS of His Majesty the King.

“They promise and engage THAT THEY WILL IN ALL RESPECTS OBEY AND ABIDE BY THE LAW; that they will maintain peace between each other and between their tribes and other tribes of Indians and between themselves and other of His Majesty’s subjects whether whites, Indians, half-breeds or others now inhabiting OR WHO MAY HEREAFTER INHABIT any part of the territory hereby ceded and herein described, and THAT THEY WILL NOT MOLEST THE PERSON OR TRESPASS UPON THE PROPERTY OR INTERFERE WITH THE RIGHTS OF ANY INHABITANT of such ceded tract or of any other district or country OR INTERFERE WITH OR TROUBLE ANY PERSON PASSING OR TRAVELLING THROUGH THE SAID TRACT or any part thereof and that they will assist the officers of His Majesty in bringing to justice and punishment any Indian offending against the stipulations of this treaty or infringing the law in force in the country so ceded…” {CAPS added}
https://www.rcaanc-cirnac.gc.ca/eng/1100100028874/1581292941464

See also:
‘Yet Another Chief Lying About A Treaty’ (Treaty 9) {Nov.14, 2019}:
“Aboriginal chiefs and activists never cease to ‘reinterpret’ {‘lie about’} the Treaties to their own advantage, and they do it confidently knowing that no one will call them out. Here is the full text of the treaty that his ancestors signed. See if you can find any ‘promised prosperity’…”
https://endracebasedlaw.ca/2019/11/14/yet-another-chief-lying-about-a-treaty

‘Unmitigated Gall‘ (Beaver Lake Cree ‘Nation’/Suing Canada) {April 30, 2018}:
“They’re suing over loss of traditional hunting and gathering {which most don’t want to do any more} due to development in their surrendered-by-treaty former territory. The treaty that their ancestors signed clearly states that development supercedes hunting and gathering rights…”
https://endracebasedlawcanadanews.wordpress.com/2018/04/30/unmitigated-gall/

‘Manitoba: Another Illegal Blockade’ (Treaty 5) {September 4, 2016}:
“In the past, when tribes have illegally blockaded Manitoba roadways and Manitoba Hydro, the Province has not only NOT arrested the criminals, but has given in to the extortion. The result – of course – is yet another blockade…”
https://endracebasedlaw.wordpress.com/2016/09/04/manitoba-another-illegal-blockade/

One thought on “‘Another Aboriginal Treaty Violation’”